The Wabbit and the Devil Red Caffè 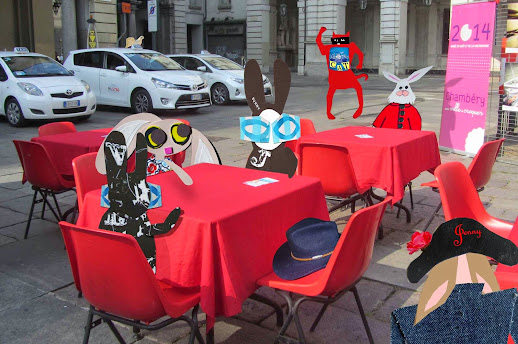 Jenny had picked the Caffè, so she arrived fashionably late - as did Skratch the Cat from the other direction. Lapinette pointed at the hat. "Why does the hat have its own seat?" "No time, here comes Skratch," hissed Lapin who was strategically positioned at the rear. Jenny laughed and sat down beside him. "Skratch! What kind of adventure did we just have?" Skratch fairly bounced. "It was a splendid reflection on the antinomies of good and evil." "Agreed" smiled Lapin. But Skratch hadn't finished. "It refused admirably to locate horror within its diegetic referents." Wabsworth shook his head and sighed. "What about the hat?" The Wabbit smirked and said nothing. "And what did you do with the secret album inside the hat?" asked Lapin. The Wabbit wore a smug look. "I removed it and hid it." "Anywhere special?" asked Jenny. "In my fur," said the Wabbit. "No-one will ever find it there." Lapinette smiled sweetly because she had already found it - and indeed played it and stealthily replaced it. "It's a good album." "How do you know?" said the Wabbit sharply. Lapinette faltered. "Oh you know - that sort of jazz thing must be nice." Skratch rescued Lapinette. "Our adventure successfully avoided becoming a musical," he stated solemnly. Lapinette thought deeply. "Maybe there's something that's opposite to music?" "That's the chord I sang in the portico," said the Wabbit. "That's why I won." "But you can't kill the devil," said Lapin, "and he has the best tunes." "That's used to be the case," said the Wabbit with triumph. "But now he's tone deaf."
at November 03, 2014