10. The Wabbit's March of the Enemies 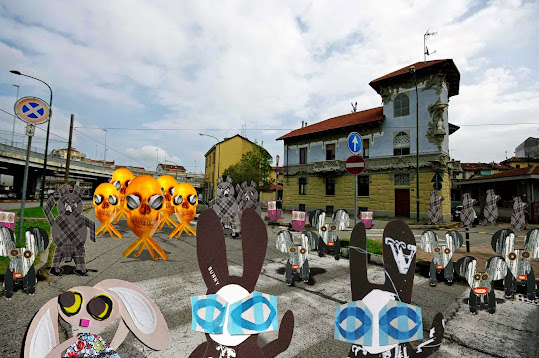 The Wabbit and his enemy allies marched through the outskirts of Turin. Lapinette and Wabsworth looked right and left, while MacDrabs pried in every corner. Beady-eyed Euls were everywhere, looking in places no-one had ever considered. The Ice Mice appointed themselves guards and took up the flanks. But Gnamskulls held centre stage - ready to pounce into any Dumpster they found. "Come on!" shouted the Wabbit and he waved a paw forward. But he muttered softly to Lapinette. "I don't see any Roman Dumpsters now." Lapinette merely blinked. "Perhaps they know we're coming." The Wabbit thought for a moment. "They're tough but they're not swift." "Then how did they get here at all?" asked Wabsworth. It was Lapinette's turn to think. "Wabbit. Did you make any environmental arrangements for your Museum of Enemies?" "Of course," said the Wabbit. "I got a very reasonable company indeed." "Located where?" asked Lapinette. "Em, Rome," confessed the Wabbit. Lapinette raised an eye. "The Cerotto Recycling Company in Malagrotta," sighed the Wabbit. Wabsworth shook his head sadly. "The Malagrotta operation was reconfigured last year." Lapinette scowled. "Wabbit, it was in Il Sole 24 ore!" The Wabbit cringed - but a sudden cry from an Ice Mouse scout let him off the hook. "Dumpsters located near Corso Svizzera." "That's close enough," said the Wabbit, clenching a paw. "Move out!"
[cerotto. Italian: band-aid, sticking plaster]
at November 26, 2014