2.The Wabbit and the Enemies Museum 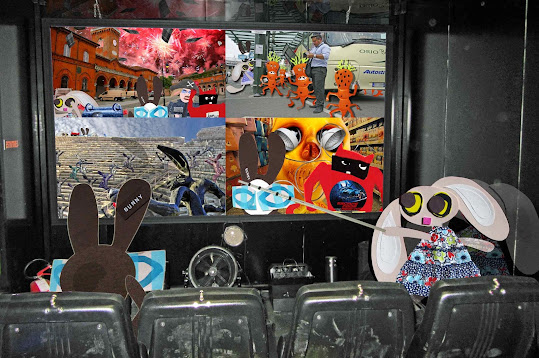 The Wabbit had a downtime arrangement with a sleazy viewing theatre in Via Nizza, and there he met Lapinette to review his Museum of Enemies project. The Wabbit scratched his head. "I invited Renzo Piano along." "When's he coming?" said Lapinette. "He has to play another gig," chuckled the Wabbit, "but he gave me some advice."  Lapinette's voice was resigned. "He doesn't know your enemies like I do." She waved a paw at the ancient projectionist and the screen lit up. "Here are some old enemies," she said. "They'll help you decide what you want." The Wabbit narrowed his eyes until they were slits. "It could be a long corridor with enemies leering from either side." "A museum has to be a responsive space," sighed Lapinette. The Wabbit nodded. "I thought rods could come out and give electric shocks." Lapinette was horrified. "You haven't thought this out." She pondered for a while. "Does it have to be a building?" The Wabbit grinned. "No, it could be all over the place." Lapinette was on the edge of a wry comment, but nodded and waved her pointer. "Our enemies are everywhere, so why don't we put them everywhere?" "All over the city," said the Wabbit. "Working models?" suggested Lapinette. The Wabbit smiled maliciously. "With special effects." "How's the budget?" asked Lapinette. "Huge," said the Wabbit. Lapinette looked quizzical. "I thought you didn't like installations?" "I call it true life sculpture," smiled the Wabbit.  "Why have a got a bad feeling about this?" said Lapinette.
at November 07, 2014