4. The Wabbit and Secret Intelligence 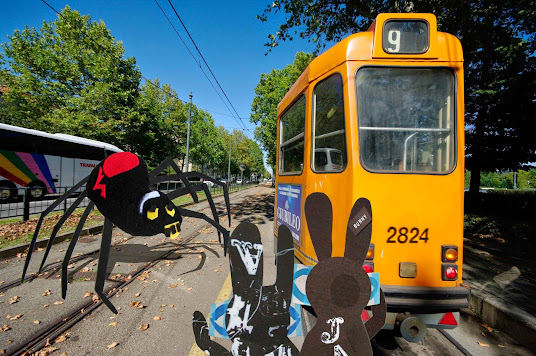 Leaving the castle behind, Wabsworth and the Wabbit hopped quickly for a tram - where they found not one but two surprises. Number Nine Tram was no ordinary tram and Marshall Duetta Spyder no customary spider. "Commander, I must speak with you." Duetta Spyder made a squiggly sign with one leg. "I wasn't expecting you and your android friend," said Nine the Tram, "do you need to visit the Late Tunnel, Wabbit?" The Wabbit grinned. "Maybe a little later, Nine." Duetta's silky voice cut sharply in. "This is most urgent, Commander." The Wabbit waved a squiggly wave with one paw. "Go ahead, Duetta." Duetta's legs rustled. "It's about enemies." Now it was Wabsworth's turn to make a squiggly wave. "The Wabbit's Museum of Enemies isn't open yet." "What museum?" asked Duetta. The Wabbit was beginning to regret his funding application. "A Museum of all my old enemies has been given the go-ahead." "I'm sorry to disappoint you, Commander," said Duetta. "But this is a completely new and original enemy." "I've no room," said the Wabbit. "They won't wait," replied Duetta. Wabsworth shrugged like the Wabbit. "OK, what are they like?" "It's hard to tell," said Duetta, "but they're dressed as trash dumpsters." "I've seen them," said Nine. "One disrupted my points on Corsa Svizzera. We were stuck for hours." "They're all over the city!" scowled Duetta. The Wabbit puzzled for a bit. "How do we recognise them from ordinary dumpsters?" "They have teeth," said Duetta.
at November 12, 2014