7. The Wabbit and the Reverse Recyclers 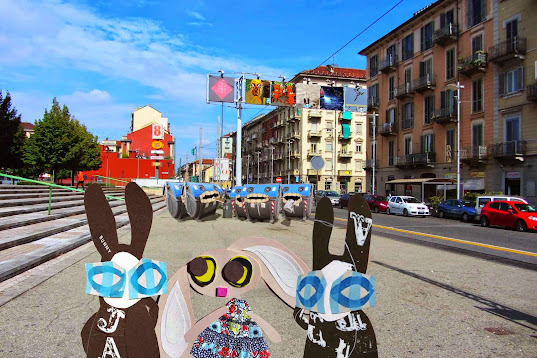 Having evaded the Roman Dumpsters, the team made their way to a caffè. But there were more Dumpsters - they seemed to be on every corner. "Any ideas, Wabsworth?" asked the Wabbit. Wabsworth scowled. "They don't seem very interested in us. They just dump trash." The Wabbit glanced around and studied them. "They're full of unsorted garbage." Lapinette thought long and hard and her eyes looked puzzled. The Wabbit squinted and Lapinette sighed. "Rome is strict about recycling. You can get a fine." "A fine for not recycling?" asked the Wabbit. Lapinette shook her head. "For putting the wrong trash in the wrong bin." "Then let's hop on over and fine the Dumpsters," laughed the Wabbit. Wabsworth looked offended by the whole thing. "I think €100 is an appropriate sum for each item." For a moment the Wabbit saw his Museum of Enemies budget take a boost. "Two hundred is better." As the Wabbit scrutinised the Dumpsters, one of them appeared to look over so he chanced calling out. "Fined a total of €800!" Suddenly there was ghastly noise, a deafening combination of grinding and chattering. Small chunks of garbage flew around and landed on the sidewalk. "Who are you?" cried the largest Dumpster. "I'm the Wabbit," said the Wabbit. The Dumpster sneered. "Give us your rubbish!" "I haven't got any," shrugged the Wabbit. A howl of delight rose from the Dumpsters. "Then we'll take you instead ..."
at November 19, 2014