5. The Wabbit and a Talkative Dumpster 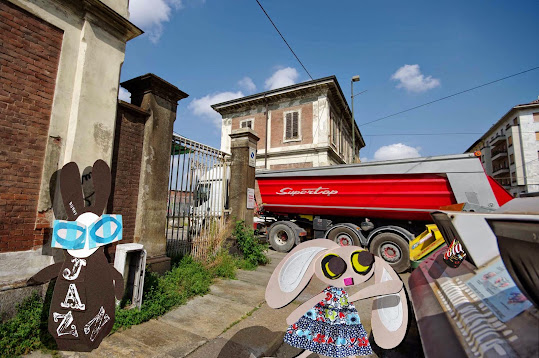 The Wabbit met with with Lapinette and together they went to the rail station to supervise materials for the Museum of Enemies. On the way, the Wabbit apprised Lapinette on developments. It was rather hot and as trucks passed in and out, they both drank several cans of Wabbit Cola. Lapinette looked at one of the many dumpsters. "They don't look dangerous." The Wabbit's 28 teeth chattered. "Marshall Duetta was adamant that dumpsters with teeth were all over the city." Lapinette shook her ears, steadied herself and threw her Cola can at the opening. Her aim was straight and the can disappeared. There was a clang and a gulp and something that sounded like a cough. "Correct aperture," said the Dumpster. "Your recycling efforts contribute to the safety of the planet. I can therefore wish you a nice day." Lapinette turned and glared at the Wabbit. "Is this something to do with your experiments?" "Nope," said the Wabbit. "I discontinued development of my automatic recyling can." From deep inside the dumpster, the hollow voice spoke. "Have you got any more?" Lapinette leaned forward and spoke into the container. "I'm afraid that's the last." "Oh," said the Dumpster, "they were nice. Do pass this way again." Lapinette looked at the Wabbit and he shrugged. So she turned back. "Maybe you can help us. We're looking for rogue dumpsters with teeth." "Devils!" cried the Dumpster. "Devils from out of town." "From where?" asked the Wabbit. "Roman dumpsters," said the Dumpster. "Treasure and trash," scowled the Wabbit.
at November 14, 2014