6.The Wabbit and the Dumpster Drama 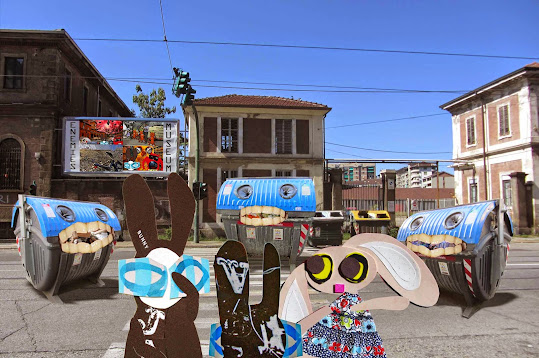 The Wabbit and Lapinette headed away from the rail yard, but there on the crossing was Wabsworth. He looked somewhat sombre so the Wabbit hailed him cheerily. "Hello Wabsworth, did you spot any Dumpster Devils with teeth?" Wabsworth stared unflinchingly at the Wabbit and nowhere else. "Yes," he said. The Wabbit waited. One of Wabsworth eyes moved imperceptibly - somewhere between a blink and a wink. "Please do exactly as I say, Commander." "Is this a game, Wabsworth?" said the Wabbit. Wabsworth nodded slightly. "I am going to hop back to the sidewalk. Follow me in a nonchalant fashion." The Wabbit looked confused. "Then what?" "We will hop round the corner at reasonable speed." "What speed exactly?" said the Wabbit. Wabsworth's eyes flickered towards Lapinette. "As if we all have somewhere definite to go." "Like as if we were going for aperitivi?" suggested Lapinette. "Exactly," murmured Wabsworth. Lapinette stood gently on one of the Wabbit's feet but the Wabbit still looked confused. "So are we going for aperitivi or not?" he smiled. "Just round the corner," smiled Wabsworth urgently, "But we must make haste." "Is the caffè going to close?" asked the Wabbit. Lapinette gazed into Wabsworth's glasses and suddenly saw a reflection of the scene behind her. She dug the Wabbit in the ribs and dragged him forcibly and under protest by the fur. "Aperitivi this minute, that's an order!"
at November 17, 2014