The Wabbit and the Hasty Hallowe'en 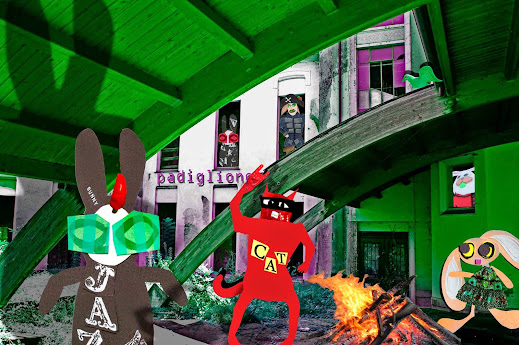 The team gathered at the rear of the old abandoned hospital for the hastily arranged Halloween party. They lit the remnants of their old fire and soon it was a hearty blaze. Shadows flickered spookily on the roof as the Wabbit turned to face an imaginary audience. He threw his arms wide like a bat and his voice bounced around the buildings. "Did you ever hear ... ?" asked the Wabbit. His audience drew a breath. The Wabbit started again. "Did you ever hear about the giant two-headed rabbit that wandered the Rannoch Moor crying for its lost soul?" They all shook their heads. "Neither did I," smiled the Wabbit. A loud groan creaked around the room beams. "It was just a joke," complained the Wabbit. "That wasn't us," said Lapinette. "Not guilty," said Skratch. "I distinctly heard a groan," said the Wabbit. "I thought it was more of a moan," said Wabsworth. "The same kind of moan the Bunnyman made?" said Skratch. "Oh, he only comes at midnight," said Lapin. "With his bloody axe," said Jenny. The Wabbit thought for a minute. "What time is it?" "It's just past twelve," said Lapinette. The Wabbit sighed with relief. "Well he won't be coming now." Just at that moment they heard a dreadful clattering of teeth and a voice moaned. "So late. Oh so late." "Late for what?" asked the Wabbit. "Late for the party," moaned the voice of the Bunnyman. The Wabbit turned to his audience, plucked a hidden speaker from his fur and grinned. "That Bunnyman is axing for trouble."
at October 31, 2014