2. The Wabbit and the Wrong Record 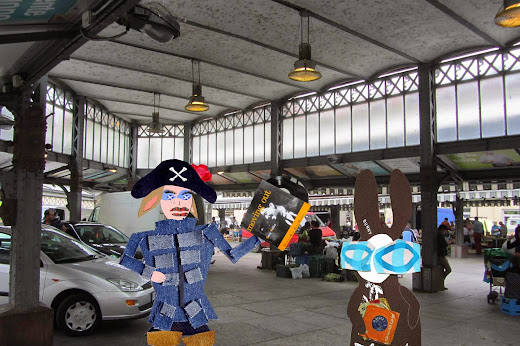 The Wabbit heard a voice call, but he didn't turn a hair because in markets you never knew what might happen. He'd already seen police patrolling with soldiers. "Contraband," he muttered. The voice called again. "Wabbit I found this!" The Wabbit clutched his spoils fiercely to his fur. Of the secret record with the secret sign, he had found no trace, but he had acquired a rare single. Finally he turned. "Jenny!" he said affectionately. "I didn't recognise your voice." Jenny held up an album. "Is this the sort of thing you're looking for?" "It might be," said the Wabbit, "but it's a re-issue." Jenny smiled and rocked slightly. "I found a place selling old records." The Wabbit was delighted. "Markets aren't what they used to be," he chortled. Jenny agreed. "Nothing but ladies' clothes and jujus made in China." The Wabbit nodded vigourously. "I remember I could get anything here. I got a left-handed circlip opener once." "And you still have it in your fur," said Jenny. The Wabbit nodded, because every time he tried to throw it away, he found a use for it. "The record salesman told me an outrageous story," said Jenny. The Wabbit's ears twitched. "He said he'd seen the devil." The Wabbit tried to be nonchalant. "What did he look like?" "A bit of a dandy. Stripes, black waistcoat." "Did he say anything?" asked the Wabbit. Jenny looked serious. "Daemones non operantur nisi per artem." The Wabbit looked thoughtful. "What do you think?" asked Jenny. "I think he's the real deal," said the Wabbit.
[Daemones non operantur nisi per artem: Demons do not operate, save through trickery.]
at October 03, 2014