7. The Wabbit and the Iron Shield 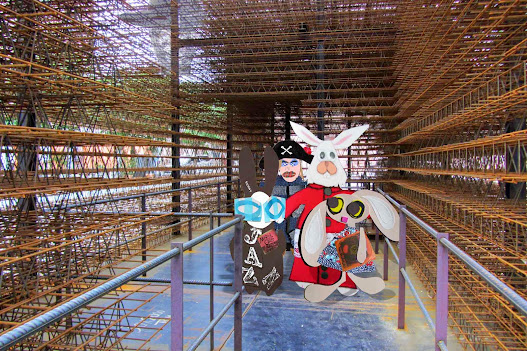 They found themselves caged under a gloomy sky with ex-Cardinal Lapin. "The Devil can't get reach us in this place," said Lapin. "Cold iron binds him." "I can't believe you're here," said the Wabbit. "Did you get time off?" "For good behaviour," chuckled Lapin. The Wabbit shrugged pleasantly and smiled while Lapin patted his back. "Not even the Wabbit can fight the Devil alone." "We'd have managed," said the Wabbit, "so what do I call you these days?" "Frankie, like you used to," said Lapin. Lapinette was beginning to show impatience and held up the disc. "What about the Devil's lost chord, Frankie? What about his sign?" "That's not his disc, it's mine," laughed Lapin. "But now the Earl of Hell thinks we have his disc," grumbled Jenny. "Exactly," said Lapin. "He has to deal with us." The Wabbit was frustrated. "So where exactly is this album with the sign?" Lapin threw back his head and gurgled. "He has it himself, but he doesn't know." "Let's sing," said the Wabbit suddenly. Lapinette clapped a paw across her brow but Lapin and Jenny started to hum. It was evil sounding - dissonant, jarring and spooky at the same time. The Wabbit threw in some tritone chords for the sake of dread but he stopped as Lapinette's falsetto bounced without warning from the iron mesh. "We shall beset the ancient foe," she trilled. "for we doth seek to work him woe." The sky cleared. "You put the devil on edge," said Lapin.
at October 15, 2014