8.The Wabbit : the Devil Rides Out 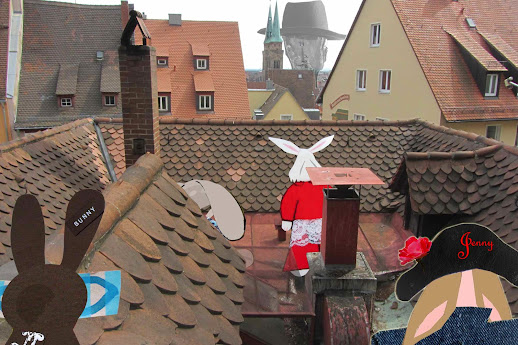 On the rooftops of the Bavarian Quarter, they watched him move out. "Do you suppose he gave up?" asked Jenny. Lapin shook his head. "The Devil never gives up." The Stetson loomed large across the city and Lapin drew a sharp breath as it cast a shadow over a church steeple. "Where's the fiend going?" he muttered. "I think I know," said the Wabbit. "He'll go back to where and what he knows." "The Devil is treacherous," said Lapinette. Lapin nodded. "So where is his circle of treachery?" They turned because the Wabbit was muttering and they could hear him. "It's all about something round." "We know that already," said Lapinette. The Wabbit looked up. "I know I'm missing something important." "Try to relax," said Lapinette. "You'll think of it at once." This always had the opposite effect and the Wabbit shook his head. Jenny intervened. "Stare at something and let your eyes go fuzzy." The Wabbit had no problem with this approach so he did exactly that. He stared and stared at the departing figure and let the whole scene drift out of focus. Everyone waited. The Wabbit's eyes turned into strange spirals. "I have it!" yelled the Wabbit. "Eureka?" smiled Lapin. "I told you so," said Jenny. "Explain!" yelled Lapinette. The Wabbit grinned somewhat weakly. "I know where he's going and I know where the album is." "We've cracked it," said Jenny smugly. The Wabbit teeth set in a grimace. "We'll have the devil's own job to get it."
at October 17, 2014