14 The Wabbit and the Devil's Surprise 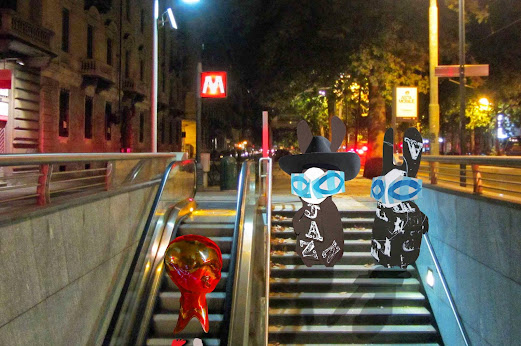 The Wabbit and Wabsworth made their way home, but there was something altogether spooky about Vinzaglio Metro. "I guess its nearly Hallowe'en," said Wabsworth, "shall we have a party?" The Wabbit grinned and tipped his hat back. "Why not!" "You can come as a cowboy," suggested Wabsworth. "Ghost Rider from the Sky," laughed the Wabbit. They chuckled for a while. "Did you hear a moaning?" asked the Wabbit. "Must be the escalator," shrugged Wabsworth. The Wabbit shook his head. "There it is again, listen." They stopped and waited. "I heard groooooh-grooooh to you," said Wabsworth. The Wabbit's fur tingled and his voice trembled. " He's back!" Wabsworth scrunchled against the wall as the hatless head of the Devil floated just above the escalator steps. It made grinding sounds that echoed from the Metro walls and it whispered threats of all that was Hell. The Wabbit stood his ground and snarled through his 28 teeth. "Egonebay oulfay iendfay!" The head turned very slowly and met his eyes. "I will cut off your head and put it on backwards." "On me or you?" asked the Wabbit. The Devil's angry retort was like the creak of a rusty tap. "I will put you upside down in a hole and set your paws on fire." "What about the snakes?" asked the Wabbit. "Any snakes in the hole?" Now the Devil's voice was like a saw. "Enough snakes to shake a stick at. Then I'll poke you with that stick." The Wabbit winked at Wabsworth and spoke to the Devil. "Are you coming to our Hallowe'en Party?"
[Egonebay oulfay iendfay: Pig Latin - Begone foul fiend]
at October 30, 2014