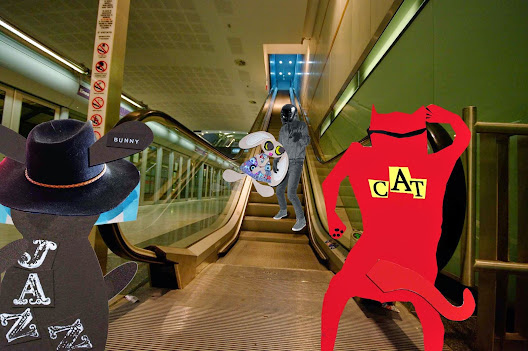 Skratch and the Wabbit found their exit blocked. With a screechy wail the escalator moved towards them bringing the Devil with Lapinette in his grasp. He pointed and his finger shook with fury. "Give me my hat and I'll let her go." The Wabbit couldn't give him the hat even if he wanted to. "You lie!" scoffed Skratch. "It's my job," said the Devil. "Then no hat," shrugged Skratch. "Anyway, it suits the Wabbit better than you." The Wabbit looked past Lapinette and scowled straight at the Devil. "You can take a rabbit from a hat, but you can't take the hat from the rabbit!" The Devil shook Lapinette fiercely again and again. Then he shook her some more. Her legs flailed and her teeth chattered but the Wabbit noticed her clutching something - an amulet that started to glow. At that instant, something happened to the album inside his hat. It span and as it picked up speed, an enchanted tune whipped up like an old phonograph. "Play it, Wabbit," murmured Skratch, "Play it like it's yours." The Wabbit concentrated. His eyes narrowed and music whispered from the station loudspeakers. The Devil looked up and his grip on Lapinette slackened. Her amulet glowed fiercely and just as she chafed at the bonds that tied her paws, the Wabbit willed the music to boom through the station. With a grinding crash, the escalator stopped dead and the Devil dropped, clasping his ears in pain. Lapinette twisted free and rolled towards the Wabbit. As the Devil writhed in agony, Skratch and the Wabbit pulled Lapinette away. "How do you like your elevator music?" asked Skratch. "Holy minimalism!" yelled Lapinette.
at October 24, 2014