13. The Wabbit's Date with the Devil 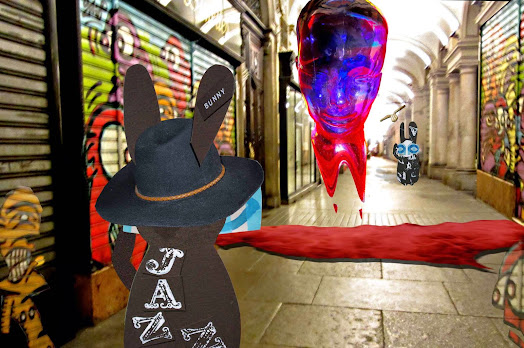 The Wabbit tipped the brim of the hat and it touched his glasses. Everything became hyper clear. The Devil was there of course, but the Wabbit ignored him and looked past to see Parakalo the Dove winging swiftly away. There was Wabsworth, his android double. He raised a paw and Wabsworth gestured back. "You were supposed to come alone," sneered the Devil. "We did come alone." The Devil heard the Wabbit and Wabsworth speak precisely as one and his voice weakened. "Give me my hat." The Wabbit was icy calm. Jazz played inside the hat and he listened carefully. He could hear spaces so he filled them with his own notes and tapped out rhythms with a paw. Wabsworth improvised. Bojangle sounds filled the portico and every tap drove the Devil lower. "I want what's mine," he gasped. The Wabbit gazed implacably as the Devil pleaded. "Give me my space. Give me the chord." The Wabbit looked down. "Want to hear it?" The Devil felt something he had never known. Fear chilled his every fibre. The Wabbit made a spooky sound that whined into existence like an overheating dynamo. Unable to muster strength, the Devil crumpled and grew infinitesimally small. The last thing he saw was a giant paw as it scuffed his remains on the sidewalk. Wabsworth hopped over to embrace the Wabbit and they danced to the last strains of music. "Devil got my sole!" sang the Wabbit.
at October 29, 2014