4. The Wabbit and the Hidden Album 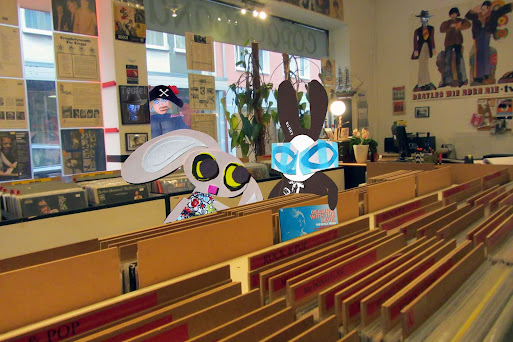 Jenny led the Wabbit and Lapinette to a part of the city neither of them knew. She said it was the Bavarian Quarter and although they both shook their heads, they eventually found themselves in a music store belonging to a certain Herr Glückspilz. Jenny kept a lookout in the street, while they both rummaged through ancient albums. "I suppose we're in the right place?" asked Lapinette. "Herr Glückspilz said we might get lucky," replied the Wabbit. They examined each record closely. "Legendary cakewalk classic?" suggested Lapinette. "Too early," said the Wabbit. "Modern Jazz Quartet?" murmured Lapinette. "Too late," said the Wabbit. They rummaged more without success but when the Wabbit noticed a flash of blue, he squeezed a paw between the shelves. "I found something," he said, tugging at an album that was stuck at the back. "Did you feel that cold draught?" said Lapinette. "Something ruffled my fur," said the Wabbit. They both looked round. "Everything OK?" mimed Jenny from behind the window. The Wabbit was suddenly aware of a large poster. "Which Beatle wore a Stetson?" Lapinette screwed up her nose and sighed, "It's U2 who have hats." The Wabbit tried to dislodge the album by shaking it but it was completely stuck. With a deft movement Lapinette plucked the album free and the Wabbit squinted at the title and read it aloud. "Dealing with the Devil." All the lights went out. "Who better?" boomed a voice.
at October 08, 2014