8. The Wabbit and the Solar Plan 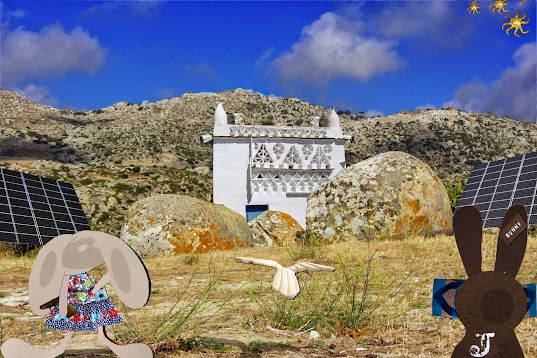 With a specially built dovecote and a few items garnered from a small yard in Volax that only Parakalo knew about, the Wabbit and Lapinette surveyed their handiwork. "Do you think it will work?" smiled the Wabbit. "Oh ye of little faith," replied Lapinette. The Wabbit was already mouthing Lapinette's reply but he glanced away in case of trouble. "Do you have a name for it?" he asked. "SunSol" said Lapinette. "Sounds like orange juice," said the Wabbit. "You'll be juice in a minute," laughed Lapinette. Parakalo cooed softly and his wings made a whirring sound. "Here they come," he said. The Wabbit looked into the sky and screwed up his eyes. "They took the bait," he murmured. "Just as planned," said Lapinette. "They aren't awfully bright," commented the Wabbit. Lapinette squinted into a corner of a cloud. "I said they were dangerous, I didn't mention brains." The Wabbit grinned with all of his 28 teeth. "They won't like it when they go Kaboom." "They're made of Nothing," said Lapinette. "They've got nothing to go Kaboom with." "No Kaboom?" sighed the Wabbit. Lapinette smiled a smile that the Wabbit found particularly sinister. "If things go wrong Wabbit, it's us that will go Kaboom!" Parakalo made a short coo, followed by two longer ones. "They're getting closer." Lapinette took out her automatic. "What's that for?" asked the Wabbit. "Consider it my remote control," said Lapinette.
at September 17, 2014