7. The Wabbit & the Fantastic Wedding 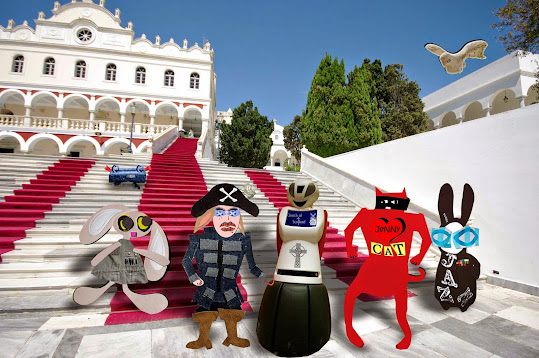 They gathered at the church and assembled into a traditional group. Robot adopted a special voice, which he had learned from recorded ceremonies and commenced with gusto. "Dearly beloved," he intoned. "We are gathered to join this rabbit and this cat in matrimony." The Wabbit looked with wonder. "Is there anyone here," said Robot solemnly, "who knows of any cause or impediment why these two may not be joined together?" The Wabbit looked across at Lapinette and flinched as she shot him a warning glance. Robot raised his metallic voice. "If ye do, confess it!" Silence fell apart from the faint cooing of Parakalo the Dove. Robot continued. "Skratch, wilt thou have this rabbit as your wedded wife, forsaking all others as long as ye both shall live?" Skratch gulped and murmured, "I will." Speak up Skratch," whispered the Wabbit. "I will!" yelled Skratch so loudly that mortar fell from the wall. "Jenny," said Robot softly, "Wilt thou have this cat as thy wedded husband?" "Why not?" replied Jenny. Lapinette prodded her fiercely in the back. "I will," said Jenny. Robot turned. "Who giveth this rabbit to be married to this cat?" "That's me!" said the Wabbit and he rummaged for the spare ring he had stored in his fur. Robot turned to Skratch then to Jenny. "Hold paws and plight thy troth." Everyone sighed with relief - but there was a strange sound from the rear and they all looked round. "Weddings mak me greet." sniffled Stone.
[Greet. Scottish dialect: Cry]
at September 15, 2014