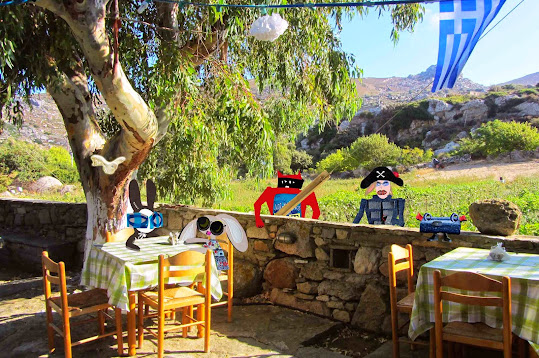 Still a little dazed, the Wabbit, Lapinette and Parakalo the Dove adjourned to a caffè in a nearby village. They were about to order aperitivi when Skratch and Jenny appeared from a field. "We found you at last," said Skratch. "We've been looking all over," said Jenny. "It was a sair trachle," said Stone. The Wabbit looked up. "Skratch! How's married life?" Skratch looked at Jenny and Jenny looked back. "What are you talking about?" asked Skratch. "You got married," said Lapinette, "and Robot officiated." "How long have you been drinking here?" said Skratch. "It's the heat," suggested Jenny. Lapinette glanced sharply at the Wabbit. "I told you these creatures were dangerous!" Parakalo cooed for a long time. "Who's that?" asked Skratch. "Parakalo," said the Wabbit. "Pleased to meet you," said Skratch. "Parakalo," said Parakalo. The Wabbit hastily changed the subject. "Well? What was that for a sort of adventure?" Jenny laughed. "It looks like hallucinatory realism!" Skratch purred at Jenny with admiration. "It appeared to have a dream-analogous authenticity." "It was both concrete and believable," offered Parakalo. He suddenly cooed in a three part call and started gathering twigs. Skratch had been puzzling. "Perhaps the wedding aesthetically enhanced reality." The Wabbit tried to clear his head. "Are you getting married or not?" "Yes," said Skratch. "Nearly," said Jenny. "That's close enough," said Lapinette
[A sair trachle: (Scottish dialect) To drag one's self onwards when fatigued,]
at September 24, 2014