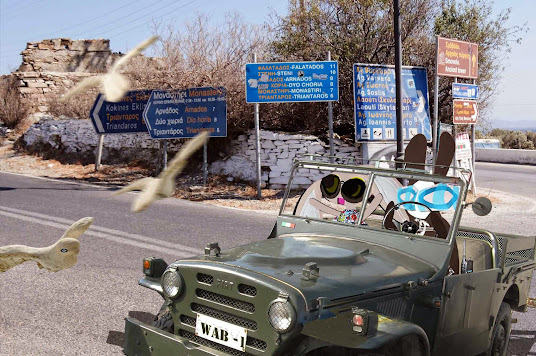 When he saw Parakalo the Dove the Wabbit screeched to a sudden halt. "We're heading for the ferry!" he shouted. "And home," added Lapinette. "Did we forget anything?" asked the Wabbit. "No," said Parakalo. "I wanted to say something." Lapinette and the Wabbit looked at Parakalo with affectionate eyes. "I had a very exciting time," he warbled. Wabbit nodded cheerfully. "So did we!" "I enjoyed it a lot!" added Parakalo. "Us too!" said Lapinette. Parakalo cooed three times. "I would like to continue." "Nothing to stop you," smiled the Wabbit. "With you," said Parakalo. Lapinette answered first. "You'd like to come with us?" "I'd like to have adventures with you," cooed Parakalo. The Wabbit pretended to look grave. "I'm afraid we wouldn't be able to pay you very much." "You mean yes!" cried Parakalo and he spread his wings wide. "I'll see you in Turin." In an instant he wheeled and shot into the air. Lapinette and the Wabbit looked up but Parakalo was a mere dot in the sky. They watched until the dot disappeared, then Lapinette turned to the Wabbit. "Where's the Department going to put him?" The Wabbit grinned with all of his 28 teeth and gunned the throttle. "Aerial espionage?" "Better radio Wabsworth," said Lapinette. "Why?" asked the Wabbit. Lapinette smiled sweetly. "To find accommodation, of course." The Wabbit wore a sinister smirk. "The old abandoned tower will do."  "I didn't know there was one," sighed Lapinette. "I've got the Tower," sang the Wabbit.
at September 26, 2014