The Wabbit and the Abandoned Tower 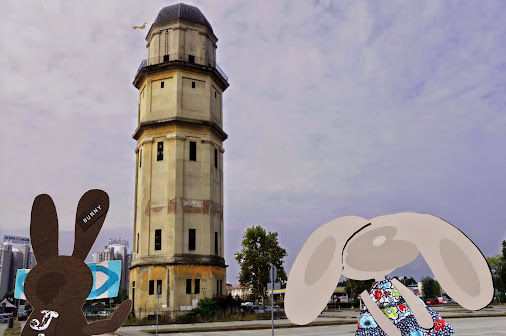 Lapinette and the Wabbit surveyed the tower. It was on the edge of town near a shopping centre and a few workshops. The place was quiet except for a traffic drone from a nearby eight road intersection. There, the noise never seemed to stop and eventually no one could really hear it. Lapinette didn't know what to say. "You bought this?" she sighed. "I did," said the Wabbit with enthusiasm. "It was a bargain." Lapinette's ears swayed slightly. "Where did you get the money?" The Wabbit's laugh was somewhere between a guffaw and a giggle. "The Dinosaur Fund." "I thought it was nearly empty," said Lapinette. "Not any more," said the Wabbit. Lapinette looked sceptical but the Wabbit was gleeful. "I routed what was left through Curaçao, then a little known parish council in rural England." Lapinette nodded and the Wabbit continued. "Then it went to a merchant bank in Frankfurt where it was washed and spin dried." Lapinette sighed again. "Finally it popped up here much bigger than it was when it started." "And you bought the tower," groaned Lapinette. "In a manner of speaking," said the Wabbit. "In return for agreeing it should be a bird sanctuary, I got it for a euro." Lapinette heard a faint cooing from the top of the tower and looked up to see Parakalo, the Dove. Then her head tilted to the side and she stared. "You know it's leaning." The Wabbit was ecstatic. "I think that means it's listed."
at September 29, 2014