2. The Wabbit & the Gods' Commission 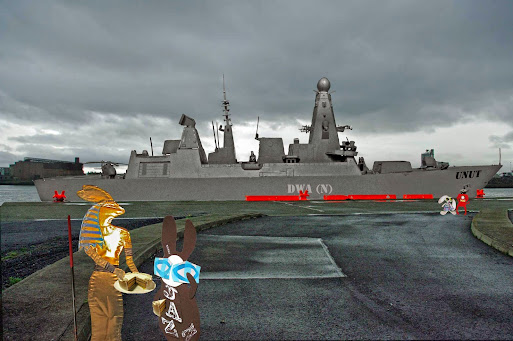 It was a dank and a miserable day for a ship's Commissioning and everyone was bad tempered. "Let's get this over with," shivered Unut the Rabbit Goddess. She produced a cake and cut off a slice and handed it to the Wabbit. The Wabbit saluted and Unut watched him fumble and drop crumbs. "Wabbit, do you know how many Gods' coffee mornings it took me to raise the funds for this vessel?" The Wabbit nodded but remained silent. "So bring it back in one piece," said Unut strictly. The Wabbit nodded again. "There's a lot depending on this mission, Commander - and the Gods are stressed about it." "Yes Majesty" said the Wabbit gravely. "So be diplomatic. Don't rock the boat." The Wabbit wanted to smile, but thought better of it. "Can you think of anything else you need, Commander?" asked Unut. The Wabbit raced through a mental check list of various weapons, tools and stocks of food and drink. "I could do with some luck," he said finally. "Fortune favours the bold," said Unut, "but the Gods will keep a vague lookout for you." The Wabbit smiled limply. "Well," sighed Unut. "There's an awful lot of sea and we're rather short on sea gods." The Wabbit had a sudden thought. "Majesty, what about the Commissioning?" "Never mind the Commissioning, here's your ship," said Unut.
at April 07, 2014