5. The Wabbit and an Exchange of Fire. 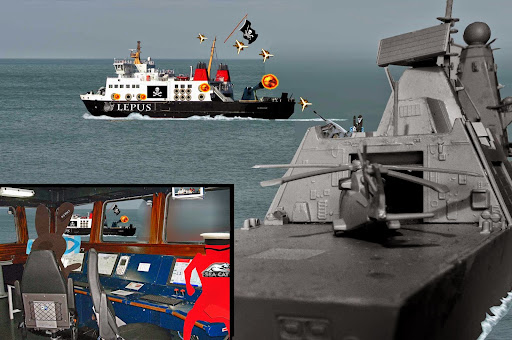 Out of a mist loomed an armed ferry and she was flying the Jolly Roger. "There she is!" said the Wabbit. Skratch pointed. "She's the Lepus and she's packing, Commander!" "Dead Slow Ahead," said the Wabbit. "But she's going to fire," said Skratch. The Wabbit shrugged, then grabbed a rail and ducked as several shells burst around the Unut. The Wabbit lifted his walkie talkie. "Now Wabsworth!" An arc of machine gun fire from a deck-mounted Oerlikon split the pirate flag from a mast and it crashed onto the deck. Everything became still. All that could be heard were waves and the cries of disgruntled seagulls. "Why didn't we pick her up on radar?" asked Skratch. The Wabbit shook his head from side to side. "And where did you get that gun?" asked Skratch. "Army and Navy Surplus," said the Wabbit. Skratch shook his head too, then looked across to the Lepus. He could see activity on deck and tapped the Wabbit's shoulder. "What next?" Before the Wabbit could answer, the ship's radio crackled and a voice spoke. "This is the Captain of the Lepus. I'm known as Rabbit Jenny." "This is Commander Wabbit of the DWA Unut," replied the Wabbit. "Belay your weapon fire and heave to." "You belay first," said Jenny. "We're already belayed," smiled the Wabbit. "Permission to come on board," said Jenny. "Granted," said the Wabbit.
at April 16, 2014