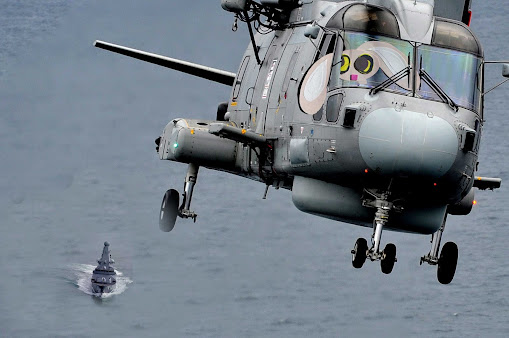 Lapinette grumbled to herself as her Merlin helichopper gripped the air. "I don't like ships, I don't like ships." The Merlin was an unfamiliar aircraft to Lapinette but she didn't care and she sent it skittering round in a mock search pattern. The Wabbit was playing some game that only he knew, but she accepted her orders professionally and carried out her duty. The sea looked calm enough now and her delicate shade of seasick green had disappeared. "I prefer to be in the air," she thought. "Mostly, it doesn't move up and down." Just then a gust of wind caught the chopper and sent it spiralling wildly but Lapinette merely twitched the controls and everything was smooth again. Even if her search was designed as a tactical manoeuvre, Lapinette kept an eye open for any craft that might be in the vicinity - but there was nothing, just an aching void of blue green waves. Lapinette looked straight ahead and hummed a Pink Floyd tune she thought went well with helichoppers. Suddenly she blinked. Was that something on the horizon? She stared for quite some time and headed northwards and away from her search pattern. There it was again. A flash of something. Lapinette squinted her eyes and figured it might be the sun glinting from a far-off ship. So she circled back. The radio crackled and the Wabbit's voice crackled too. "Anything to report?" "Not one single thing," said Lapinette.
at April 11, 2014