The Wabbit & the real Adventure Caffè 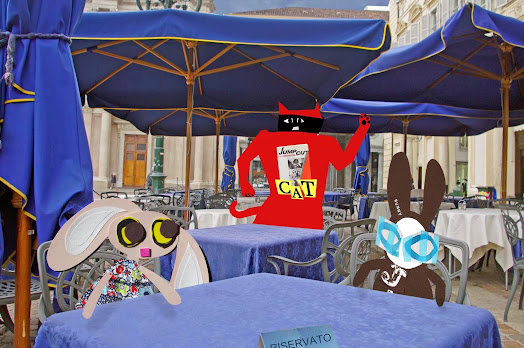 Lapinette was first to arrive and she'd been thinking. She knew the Wabbit wasn't telling the whole Orange Phantom story and surmised he had good reason. Nevertheless she decided to have some fun. "Oh Wabbit, that training mission was a good idea," she said. "We can all use a bit of practice." Now the Wabbit felt alarmed, but he heard Skratch coming and turned. "Skratch! What was that for a sort of adventure?" "Skratch had also been thinking and thought he'd have fun too. "It was very Twin Peaks by way of Blade Runner." Lapinette watched the Wabbit's face and when he smiled she pounced. "You like Twin Peaks don't you?" "Oh yes!" said the Wabbit, "it certainly challenged the TV rubric." Lapinette leaned back and let Skratch do the work. "I think Twin Peaks revolved around deception," he purred. "What do you think, Wabbit?" "It was baroque and labyrinthine," said the Wabbit cautiously. "But the fact that characters led double lives is insignificant." "I disagree, Wabbit," said Skratch. "It was a postmodern take on deception itself." The Wabbit squirmed. "I need a coffee," he said. "This," said Skratch, "is the Caffè Torino. There's no damned finer cup of coffee in Turin." "You know more than us, Wabbit," said Lapinette finally. "I think I know," gulped the Wabbit, "but sometimes my paws bend back."
at March 12, 2014