3. The Wabbit and Idea Time 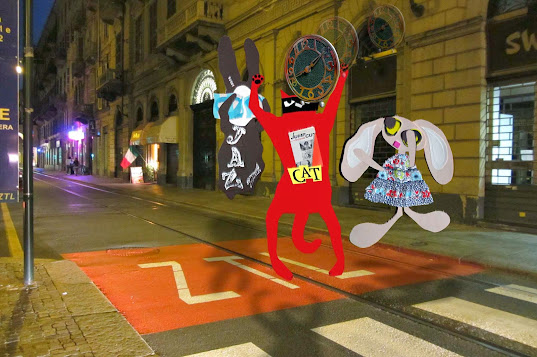 All day and through evening until late, Lapinette and the Wabbit scoured the city for the Wabbit's idea. They were going to call it a night when they caught sight of Skratch coming out of a kebab shop and they called to him. But at the same instant another object appeared just above his head. "Grab it Skratch!" called the Wabbit. "We're chasing it!" Skratch leapt high in the air and just got a paw to the edge. "Identify yourself," he screeched, "and be quick about it." "I'm the Wabbit's idea," said the object, "and it's time for me to be going." The object gradually faded then with a slight plop it disappeared. Skratch turned to the Wabbit. "What the devil is happening Wabbit? Is this a test?" The Wabbit shook his head ruefully. "It's my idea, it keeps vanishing." Lapinette chimed in. "It was a pillow, then bathroom scales and now it's a clock." Skratch gazed at the empty night. "Wabbit, how did it escape?" "I have no idea," said the Wabbit. "And you're chasing it?" asked Skratch. "That's the general idea," said Lapinette. "I'll help you look," said Skratch. The Wabbit smiled with relief. "Oh good, I had the same idea." Skratch smoothed his fur with both paws and flicked his tail. "This idea's time has come," he muttered.
at March 19, 2014