The Wabbit at the Secret Caffè 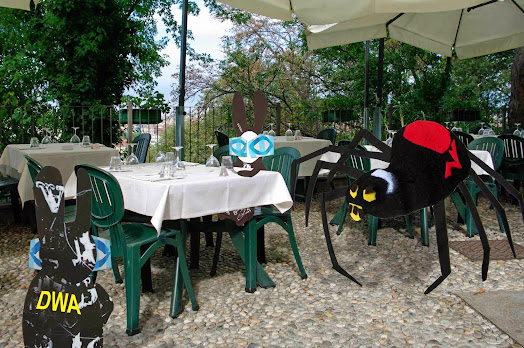 In a secluded caffè that lay high on a hill overlooking Turin, the Wabbit held a special meeting with Wabsworth, his android double, and Marshall Duetta Spyder. He was first to arrive and somewhat impatient. So he tapped his paws in a fair imitation of Dave Brubeck's "Take Five" and watched his colleagues arrived from different directions - as instructed. "On with the work," said the Wabbit and he struck a glass with a fork. "You called the meeting, you start," said Duetta in her silky voice. "I want to start," interrupted Wabsworth, "because I'm a little unhappy with our subterfuge." Duetta was always happy with subterfuge. She shook her head. "Wabsworth," said the Wabbit. "It was of the utmost importance that everyone had realistic reactions." They all nodded gravely, so the Wabbit continued. "I want to know how our adventure looked to our enemies." "It looked most authentic," said Wabsworth. The Wabbit shrugged. "And that's why no-one was told,". Wabsworth sighed and stuck his paws in his fur, just like the Wabbit. "Our enemies will try to make contact with the Orange Phantoms," continued the Wabbit. "Which are departmental holograms!" said Wabsworth,. He brightened a little. "When will that be?" asked Duetta. "Not immediately," said the Wabbit. "They'll bide their time and so shall we." "When shall we inform the others?" asked Wabsworth. "When it's the most fun," smiled the Wabbit.
at March 10, 2014