19. The Wabbit and the Bay Door 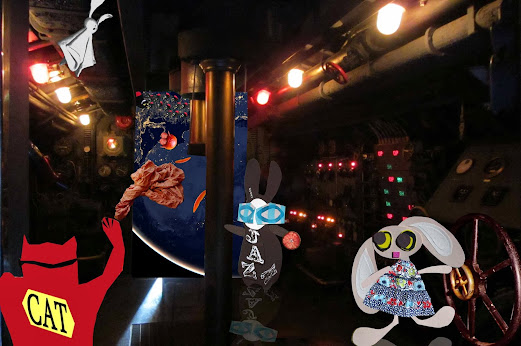 Inside the blue craft, the Orange Phantom shouted loudly and tried to twist out of Skratch's grip. But Skratch had learned well from Puma and refused to release his prey. With a sudden sigh, the Phantom's wings detached, his cloak deflated and his head floated in the air. "Now!" shouted the Wabbit. "Everyone hang on!" yelled Lapinette and she span a wheel. Air hissed as a bay door opened and blue light pierced the craft. With a shove of his paw and a kick of his leg, Skratch sent what remained of the Orange Phantom spiralling into space - and straight into the grasp of Duetta's Red Spiders. "Doors!" shouted the Wabbit. With lightning speed, Lapinette span the wheel in the other direction and the bay door hissed shut. For a moment all that could be heard was the faint hum of the craft's life support system. "Phew," said Skratch, sniffing his paws. "He was a wriggler. That could have been a sticky situation."  Lapinette looked for somewhere to wipe her paws. "It still is," she grimaced. A heavy smell of citrus hung everywhere and she shook her head. "I don't like fruit," she said. "Neither do I," said Skratch."I don't mind bananas," said the Wabbit, but everyone ignored him. He looked around. "Ghost Bunny, what about you? Oranges or bananas?" Ghost Bunny gave a wail. "They just don't appeal."
at March 03, 2014