7. Dénouement and the Wabbit 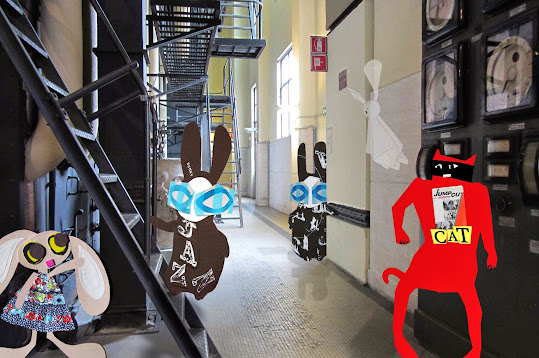 The Wabbit climbed down the ladder and waited for the inevitable. "Don't you want to hear what we have to tell you?" asked Lapinette. "I'm all ears," said the Wabbit and he paused for a moment and hung from a bar and swayed. Lapinette pointed. "This whole vanishing idea thing was our idea. "What?" shouted the Wabbit. "I'm your Commanding Officer!" Lapinette put her paws on her hips and pouted. "We're a team," she said, "and we deserve to be in the know at all times and not tricked." Skratch purred gently. "So we decided to take a leaf out of your book." "And teach you a lesson," added Wabsworth. The Wabbit was horrified. "Et tu, Wabsworth?" he cried. He shook his head and looked all around for his vanishing idea. "You won't see the idea again," said Lapinette. "They were holograms," said Skratch. "Designed to make you own up." said Ghost Bunny. The Wabbit appeared nonplussed. "How on earth did you get the budget for this?" "From the Dinosaur Fund, just like you," said Lapinette. "That's how we found out about the Orange Phantom mission," said Skratch. "There was an unexplained transfer of considerable size from that account." "Can't be much left in there now," said the Wabbit, ruefully. "More than enough for a big dinner," smiled Lapinette. The Wabbit brightened. "What's on the menu?" "Humble Pie," laughed Lapinette.
at March 28, 2014