1. The Wabbit and the Vanishing Idea 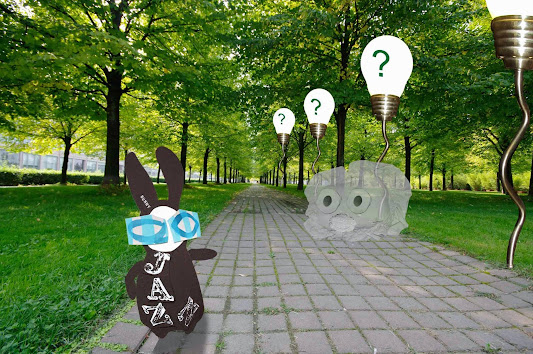 The Wabbit was between adventures and that was a place he disliked. He had been hopping all over town desperately trying to think of an idea, when he finally arrived at Lingotto. It was a place where there was always something happening, so at first he took little notice of what he thought were new streetlamps. The Wabbit stopped in his tracks and thought hard. "These are giant lightbulbs," he said to himself, "and they're totally out of place." The Wabbit suddenly froze because he felt the germ of an idea dimly surface. "I think I have it ..!" But the moment the idea crystallised, it vanished. "Curses," said the Wabbit. "I'll try again." So he screwed up his eyes and wrinkled his nose and thought and thought. It took a full five minutes for anything to happen. Then a vague vestige of an idea seized him and he was just about to grab it, when it disappeared again. "Fiddlesticks!" thought the Wabbit. He was contemplating making one more attempt when he became aware of a floating creature to his left. "Who are you and what's your business?" he asked in a bad-tempered manner that was unlike him. "I'm your idea," said the creature. Suddenly, the creature laughed and waved at the Wabbit. But as the Wabbit reached to grasp the idea, it faded until nothing was left. "That's a dangerous idea," thought the Wabbit.
at March 14, 2014