2. Lapinette has a Good Idea 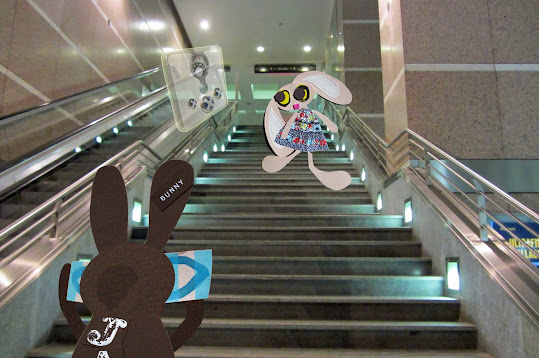 "Stop that thing!" shouted the Wabbit. Lapinette wasn't expecting to meet the Wabbit in the Metro, nor to see him in such a dramatic mood. But all the same she turned and when she did, she saw a strange object. "Who are you and what do you want?" she glared. The object merely smiled. "I'm the Wabbit's idea," it said. Then it faded and disappeared. Lapinette swiped around but there was nothing to grab, so she looked at the Wabbit sternly. "Are you up to something again, Wabbit?" "It says it's my idea and it's been eluding me all over the city," huffed the Wabbit. "It looks like bathroom scales," said Lapinette. "It keeps changing," sighed the Wabbit. "It was a pillow before." Lapinette thought for a good minute and the Wabbit thought he could hear her brain whirring. "Let's join forces," she decided," and we'll nail it." "Oh good," said the Wabbit and he grinned. "But should we entertain this particular idea?" "Let's be clear Wabbit," said Lapinette, "was it an idea or just a passing thought?" "It was the faintest glimmer of an idea," sighed the Wabbit." "Ideas are always in short supply," stated Lapinette firmly, "so when we catch up with it, we'll make it talk." "Good idea," surmised the Wabbit, "because once an idea has taken hold, it's impossible to get rid of it." "That makes our work easier," said Lapinette.
at March 17, 2014