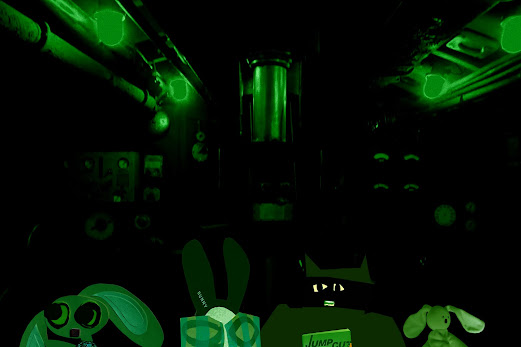 They all blinked as their eyes tried to see in the ghostly glow. The Wabbit looked around and made out vague shapes and blinked again and counted. "We're one extra," he hissed and he poked the shape next to him. "Ouch," said a voice. Now everyone blinked rapidly and stared. The shape grew familiar and then spoke. "Oh it's you, Wabbit. I wondered where you were." The Wabbit shook his head. "How did you get here, Skratch?" Skratch also shook his head. "I'm not sure. I chased after you, then a force sucked me right into the craft" "You didn't see the Orange Phantom?" asked the Wabbit. "No but I heard voices shouting about cargo and I lay low." Once more, the Wabbit looked around - but things remained unclear. Then he remembered that Skratch had a cat's night vision and he made a wry grin. "What is this place Skratch?" Skratch raised his eyes. "At first I thought I was in a power station but then it struck me as more familiar." The Wabbit waited but Lapinette jumped in. "What on earth is it, Skratch?" "It looks like a submarine," came the reply. The Wabbit thought long and hard about crafts and planets and primeval atoms and nothing made any sense, except for one thing. "Skratch, can you sail it?" "I think so," said Skratch, "so what do you want me to do?" "Dive!" yelled the Wabbit.
at February 17, 2014