9 The Wabbit and the Tangerine Storm 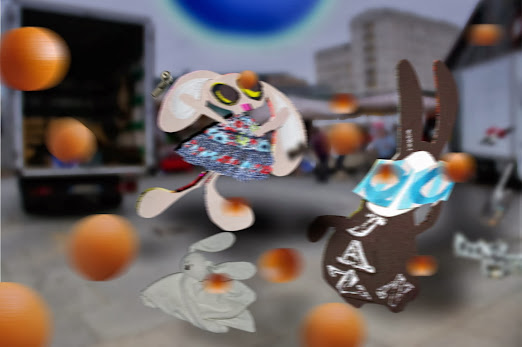 The team headed up Corso Giulio Cesare which the Wabbit didn't like one bit, because he thought it was unlucky. He was still cold and muttering about the Ides of March, when he felt a light wind. "I have a bad feeling about this," said the Wabbit and then he cried with pain as a tangerine hit him full on the nose. With a suddeness that took them all by surprise, they were surrounded by a flurry of fruit. The Wabbt swayed back but Lapinette left the ground and two automatics flew from under her dress. The Wabbit clenched his 28 teeth as various items he kept in his fur spilled out and blew around. "The Tangerine Storm!" yelled Ghost Bunny. The Wabbit yelped as another tangerine whacked his forehead. "What do we do Ghost Bunny?" Lapinette strained to be heard above the wind. "Sit it out," screamed Ghost Bunny. "It will pass!" The Wabbit and Lapinette felt they were in no position to sit, but as suddenly as it had begun the tangerine storm passed and they dropped to the sidewalk like stones. "I bashed my knee," moaned the Wabbit. He looked aound for sympathy, but no sympathy was forthcoming. "This means war," he hissed, then thought of Brutus and quoted him. "We must take the current when it serves - or lose our dentures." "Ventures," sighed Lapinette.
at February 07, 2014