17. The Wabbit and Primeval Surprise 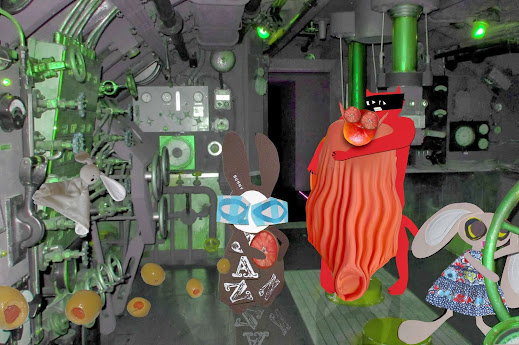 The lights changed and the Orange Phantom lunged at the Wabbit. But with a move that he'd learned from Puma, Skratch the Cat pounced and gripped the Phantom in a headlock. Now the Wabbit looked at the Phantom with distaste. "Check him out," yelled Lapinette, who had taken the helm. The lights flickered as the Wabbit looked the Phantom over. "What exactly do we have here?" he muttered. He leant down and scooped the citrus slice from the Phantom's robe and held it up and looked at it. "Leave that alone!" spluttered the Phantom. But the slice was sticky. The Wabbit tried to detach his paws without success - so he squeezed, but it wasn't pips that emerged. The objects were green and had a single red eye. As they started to grow, Ghost Bunny fluttered down to have a closer look. "Primeval olives! Don't touch them Wabbit." The Wabbit's paws were already gooey, and he had no intention of sullying them further. He was content to watch as the olives floated towards the bulkhead, growing as they travelled. With a slight popping sound, they passed straight through the walls and were gone. The Wabbit turned. "OK Phantom, this is your last chance. Spill the beans." But the Phantom could only gasp in Skratch's vice-like grip. The Wabbit glanced at Lapinette. "What do you reckon?" "I reckon I need an aperitivo," she said.
at February 26, 2014