15. The Wabbit & the Lapinette Factor 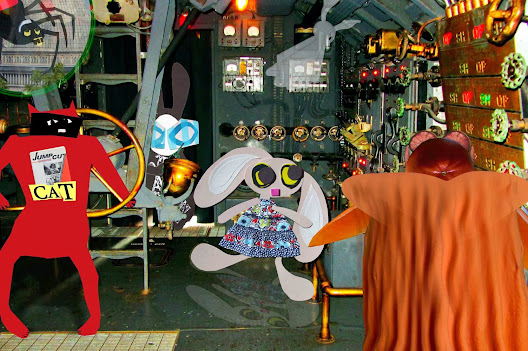 The Orange Phantom burst through the hatch and he looked far from pleased. "Relinquish command of my craft!" he cried in an acid voice, "or else!" "Oh," said the Wabbit in mock disappointment. "No can do!" "Aaagh!" shrieked the Phantom. "You'll need to speak to my superior," said the Wabbit. "She deals with all that sort of thing." "The female?" gasped the Phantom. "Oh they're awfully nice when you get to know them," shrugged the Wabbit. It was the moment when Lapinette sprang into the air and rushed headlong at the Phantom with burning eyes. "All your crafts are impounded," she thundered with a controlled rage that made the Wabbit's eyes water. "Make your way to Wabbit Space Port 3 where your ships and cargo will be seized and your crew given tickets home." The Phantom seethed with fury and the Wabbit took advantage of the moment by fishing in his fur and murmuring, "Fix location."  "What did you say?" shouted the Phantom. "I need a vacation," said the Wabbit. "Don't we all?" A sound came from deep in the Wabbit's fur and the Phantom scowled. "What was that, earth creature?" "Indigestion," said the Wabbit. "Completely chronic." But the sound turned into Marshall Duetta Spyder's silky voice. "Citrus Spiders locked on your coordinates, Commander." "I heard that!" shouted the Phantom. The Wabbit shook his head sadly. "Tinnitus," he muttered.
at February 21, 2014