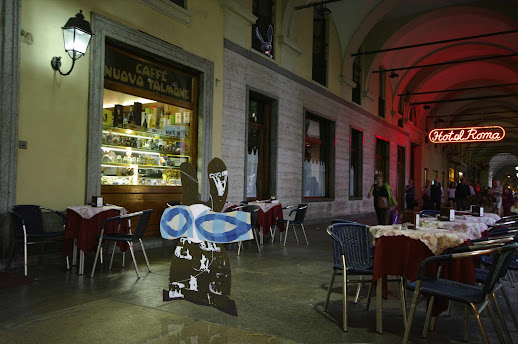 Wabsworth, the Wabbit's double, hopped purposefully around Piazza Carlo Felice in the hope of being obtrusive - yet not obtrusive enough to arouse suspicion. He felt he was succeeding because some people smiled, some grimaced and some looked straight through him as if he didn't exist. "It must be my super glasses," he thought. Even though Wabsworth was an android, he had particular likes and he was especially fond of his pair of blue glasses. He wondered where the Wabbit had found them. "He came across them in some specialist shop in a far-off land," he murmured as he hopped forth at an ambling pace. He was just allowing himself an android smile when he suddenly felt his fur prickle as he sensed an unwelcome presence. Wabsworth wondered whether the Hit Rabit had taken the bait, so avoiding glancing back, he quickened his pace and headed towards the railway station and the Via Nizza. He had been instructed to lead the Hit Rabit a merry dance, so he zig-zagged in and out of the porticos and pretended to look in the many interesting display cabinets in the arches. "I'll have another look at a future date when things aren't so pressing," he decided and he sped onwards at a fair hop. On his way, Wabsworth wondered many things and he wondered if he wondered too much for an android. He wondered if the Hit Rabit wasn't from out of town. He wondered if maybe he'd been double booked. "I wonder if he needs glasses," wondered Wabsworth.
at July 02, 2012