3. The Wabbit & the Roman Invasion 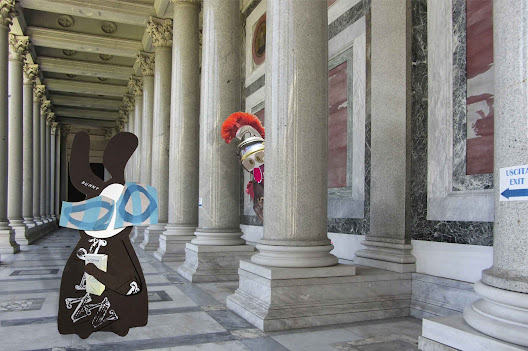 The Wabbit hopped leisurely through the portico of St Paul Outside-the-Walls and, as was his way, felt quite at ease in the imposing structure. But as he hopped he became aware of someone or something watching him. Now the Wabbit’s predisposition for paranoia was well known, but as time passed, he had developed a working relationship and was on rather good terms with the phenomenon. So at first he just twitched his ears and glanced up at the roof and looked around and about. He knew that mosaics could play tricks with the eyes, so he clutched his fur remedy firmly and took in the scene. The Wabbit liked to count the Basilica’s 150 columns as he hopped because he found it soothing  - and he was supposed to be on a relaxing holiday so he did exactly that. But suddenly his fur started to prickle. He had miscounted and that never ever happened. The Wabbit turned his head to see a flash of red and a figure vanishing behind a pillar. "Romans!" thought the Wabbit. The Wabbit was tolerant enough of Romans but this looked like trouble. Certainly he recalled their record with Paul was mixed to say the least. He also knew that Roman soldiers had weapons, which they called "throwables", and he had no intention of getting in their way. He grasped his box closer to his chest. "They’re not getting my fur lotion," thought the Wabbit.
at July 17, 2012