3. The Wabbit and the Change of Plan 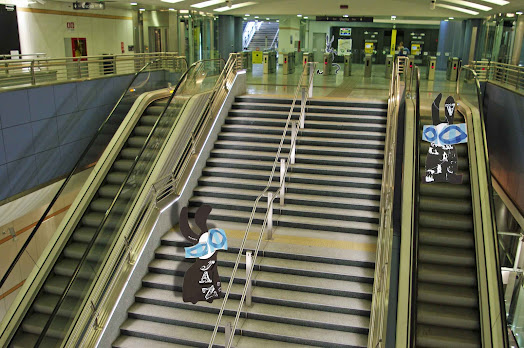 Wabsworth the Wabbit’s android double liked the Metro. He had already pressed three buttons and as he pushed his ticket through the machine it made a satisfying sound. So he hopped on the escalator and let his sensitive ears measure how far behind him his follower was. "I’ll bet the Hit Rabit doesn’t have a valid ticket," thought Wabsworth and he sneered an enormous sneer at such deceit. He so enjoyed the Metro and was just giving himself an electronic pat on the back when something stopped him in his tracks. Wabsworth was aghast. "Oh no, the plan’s gone wrong!" he thought as he saw the Wabbit coming up the stairs towards him. But the Wabbit signalled to him, put a paw to his lips, did several things with his head and winked. Wabsworth hadn’t a clue what the Wabbit meant so he processed this data again. "Wink means a trick and I’m supposed to know," he thought. The Wabbit smiled and nodded his head and flipped his ears. Wabsworth winked and continued to think. "One jerk up means he knows that Hit Rabit is there," he reasoned. "And a jerk down means carry on down the escalators." So Wabsworth started to hop faster and the Wabbit turned and began to lope down the stairs with enormous speed. Wabsworth didn’t think the Hit Rabit had seen the Wabbit, because his follower had been too busy avoiding his fare. So Wabsworth smiled to himself and thought of a private revenge on the Hit Rabit. "We’ll make him pay double for this affront," he murmured.
at July 04, 2012