The Wabbits in the Jazz Club Caffè 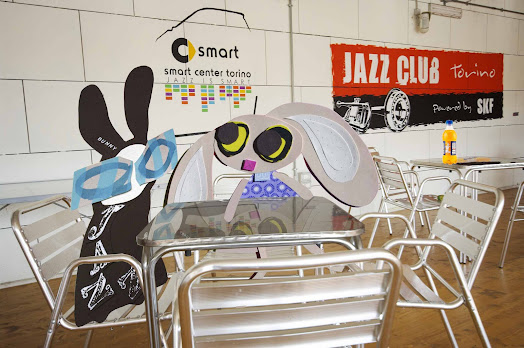 Back in Turin, the Wabbit propelled Lapinette into one of his favourite haunts. He had asked the staff to be on the lookout for Romans and a waiter had assured him that he always was. Reassured, the Wabbit sat down to wait for a special cocktail of his own invention. "It’s taking ages," said Lapinette. "It has to be precise," said the Wabbit. "What do you call it?" smiled Lapinette. "It’s called a Jazz Wabbit," replied the Wabbit. Lapinette waited very patiently to hear about the ingredients but the Wabbit took his time. "It’s just like a carrot aperitivo," he said finally,"but instead of soda there’s Irn Bru." "But they won’t have any Irn Bru here," scoffed Lapinette. "I used to bring my own," smiled the Wabbit, "and now I hear that lots of people have been asking for Jazz Wabbits." Lapinette shook her head. "It will sweep the land no doubt," she said and she had a sudden vision of a bottle of Irn Bru in every fridge in Italy. "What sort of adventure do you feel you had this time?" she asked suddenly. "It was a dream so it doesn’t count," sighed the Wabbit. "It was a real dream," said Lapinette, "and in it was a detailed film epic, within a fur meta-text." The Wabbit looked shrewdly at Lapinette. "Have you been raiding my cinema library?" he asked. "No, I've heard you talk and I just made that up," said Lapinette. "Then what did the film think, and who did it talk to?" asked the Wabbit. "A film can't think," said Lapinette. "You'd be surprised," said the Wabbit.
at July 30, 2012