4. The Wabbit and the Emergency Call 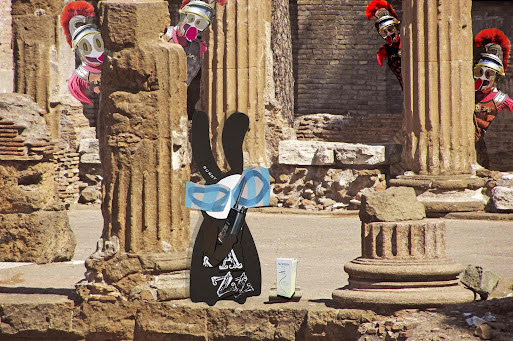 The Wabbit loped through the city keeping one eye on the Roman soldiers whose numbers appeared to be increasing. The Wabbit knew the city well, but not as well as the Romans and he couldn’t shake them no matter how many twists and turns he took. So when he got to Largo Argentina, he delved deep in his fur for something he had almost forgotten he had with him. His walkie-talkie was directly connected with Wabbit Command and he had been expressly forbidden to take it on vacation far less use it. The Wabbit deemed this an emergency so he pressed a button and hissed "Wabbit Command, Wabbit Command. SOS." The radio crackled alarmingly. "Are you enjoying your holiday, Commander?" said a voice. "I’m being tailed, send help," whispered the Wabbit. "Yes. Yes Sir. We were warned to expect a call like this and you’re on holiday Sir," said the irritatingly soothing voice. "Look, this is not a joke, send assistance," hissed the Wabbit.  "What’s that Sir?" came a calm reply. "This is not, repeat not a joke," hissed the Wabbit. "It’s the Romans. Send reinforcements." "How much Sir?" asked the voice. "Aaaagh!" shouted the Wabbit. "Send reinforcements, they’re going to advance." "Got it Sir," the voice replied. "Send four euro, you’re going to a dance." "Grrr," growled the Wabbit. "Glad to hear you’re enjoying your vacation, Sir," said the voice and the radio went dead.
at July 18, 2012