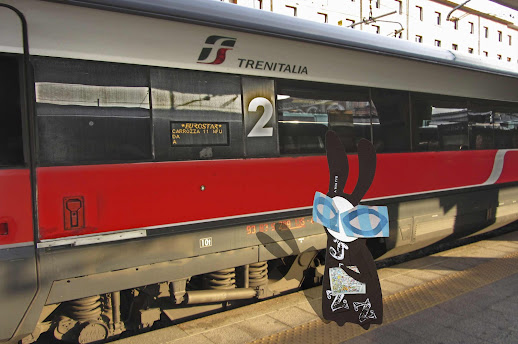 The Wabbit resumed his vacation but refused to take the bus. "I’ll take the Big Red Train" he said to himself and he picked out a seat, paid his fare and propelled himself along the platform. It wasn’t that the Wabbit didn’t like having vacations. He just knew that something always happened and he would have to work. He hesitated to call this a busman’s holiday for obvious reasons. The last time he went by bus it took him home and then he had lots and lots to do. "I want to relax," thought the Wabbit. "I want to read a puzzle magazine and figure things out." The Wabbit especially liked complicated puzzles, where the reader had to think through a location, making correct assumptions. It was like real life but without ramifications. The Wabbit hoped his journey would be ramification free.  So he clutched his Settimana Enigmistica to his chest like a talisman. As long as the puzzles stayed inside the magazine, he would have no trouble. "OK," mused the Wabbit. "If you drive the train from Rome to Turin, and 22 people get off at Milan and 2 get in, then the train stops at Bologna and 7 get in and 2 hop off, then another 15 join the train when it stops at Florence, and then after 5 hours the train stops in Rome, what’s the name of the driver?" The Wabbit knew the answer so he giggled and hopped on the train.
at July 09, 2012