8.The Wabbit speaks to the Rabbit Goddess in the Moon 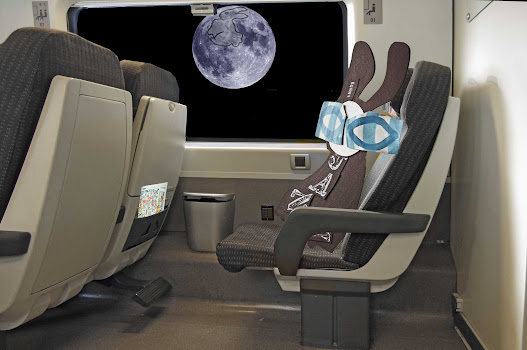 The Big Red Train zoomed along and day turned into night. The Wabbit tucked his puzzle magazine in the seat in front and looked up at the moon. Sometimes he fancied he could really see the Rabbit Goddess in the moon. So he stared and stared and the more he stared, the more she took shape. The Wabbit wasn’t particularly religious, but he was spiritual and if Goddesses spoke to him he was inclined to speak back. This time he chose to speak first. "What’s it all about, Goddess?" he murmured. Although there was no reply, the Wabbit felt the Moon Goddess was waiting. So he waited too and as he waited he started thinking. Then he did something he sometimes did when the situation demanded. He thought about everyone he had ever known. With some he was still in everyday contact and a few of those he considered his friends. Some were long out of touch and he hadn’t the slightest clue what had happened to them. But an increasing number had permanently departed and could never ever return. It was the last group that puzzled the Wabbit and the more he puzzled the harder it became to find an answer. "I know there’s an answer to every puzzle," thought the Wabbit and he instinctively reached for his puzzle book to look at the back and find out. But neither the question nor the answer was in the book. "Wabbit!" The Wabbit heard a soft voice and turned to look up at the moon. "For some puzzles there is no answer," said the Rabbit Goddess.
at July 12, 2012