7. The Wabbit gets an Outcome 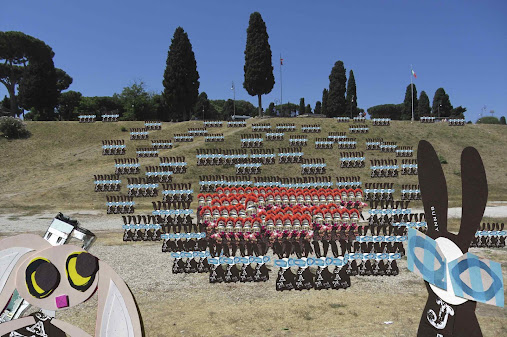 It happened with lighting speed. The 400 Rabbits charged in a wedge that suddenly split and they quickly surrounded the Romans whose formation was clumsily conceived. The 400 Rabbits packed in until the Romans were penned like sheep while a reserve battalion of rabbits streamed over the hill and down the slope to capture escapees. In what seemed like an instant it was all over and the Wabbit's lieutenants hopped forward to take the surrender. A groaning and a moaning rose from the Romans, who were not used to losing battles against rabbits, and a cheer rose from the 4oo. "Good tactics, Commander Wabbit," said Lapinette. "Did you learn that from Sun Tzu’s book of War?" "No," said the Wabbit and he wiggled his ears. "I adapted it from an old episode of Star Trek." "What shall we do with them now," asked Lapinette. "We can’t keep dumping enemies in the Sombrero Galaxy." The Wabbit turned to the 400. "What shall we do with them?" he yelled. There was silence. Then the 400 turned their paws down as one. The Wabbit smiled. "Well, what happened in Star Trek?" enquired Lapinette. "They let them go," said the Wabbit. “And overcome with shame they melted away to trouble no-one again." Lapinette looked sceptical. "I’m joking," said the Wabbit. "Take them away!" he yelled to the 400, "and put them in the Coliseum." Lapinette’s eyes shot in the air. "The tourists will take care of them," explained the Wabbit. "That’s harsh," said Lapinette.
at July 24, 2012