1. The Wabbit gets holiday Instructions 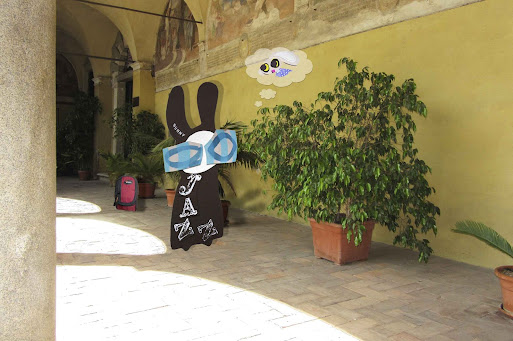 It had been a long journey and the Wabbit was rather tired. He had checked in at special hotel run by members of an Order sympathetic to the aspirations of rabbits and he had even received a special rabbit discount. So leaving his small bag for the porter, he hopped through the cloisters. The Wabbit felt a sense of peace descend on his fur. The last mission had, for some reason, left him exhausted so the Wabbit looked forward to a fortnight of complete rest. Lovely Lapinette had been most specific on this matter. "Definitely no adventures!" she had instructed. "Check," the Wabbit remembered replying. "And no thinking of adventures," she had added with a raised paw. "Check!" The Wabbit had responded with vigour. "No carrying adventure paraphernalia in your fur!"  Lapinette had prodded him in the ribs and as the Wabbit said "Check," several items had fallen on the ground, including an automatic, a screwdriver kit, a roll of duct tape and a small emergency coffee pot. The Wabbit recalled Lapinette saying, "You can hang on to the coffee pot," and he felt under his fur to make sure it was still there. "A holiday is not an excuse to be stressed!" Lapinette had hopped up and down waving her paws around. "And you’re not allowed to have a watch!" The Wabbit grinned because he knew there were so many clocks in the street that he didn’t need one. "Checkedy check check check," he had cried and loped off.
at July 14, 2012