2. The Wabbit's quest for the Lost Data 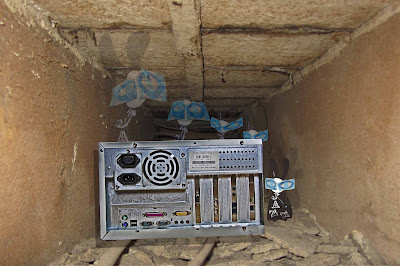 The Wabbit got smaller and smaller and found himself in a strange place which appeared to be under the floor. "It's grubby down here," grumbled the Wabbit. The Wabbit grumbled if he didn’t understand things and he was apt to complain bitterly and at length to himself – because usually there was no one else nearby to listen to his complaints. He looked all around anyway and he couldn't help but notice a large box which, on inspection, was fairly recognisable. "It’s an old computer," said the Wabbit with distaste. He looked at it disparagingly because he knew that it was incapable of supporting one of his lists far less a sophisticated program like ListWrite Lite. "The lost data must be in there," he thought, "otherwise I wouldn’t be here." The Wabbit paused to agree with himself, which he very often did. But when he agreed with himself, his ears would tilt back and then suddenly forward in a manner that some found disturbing. So the Wabbit tried not to agree with himself too much in public. "I suppose I’ll have to examine the interior," thought the Wabbit, "and see if there’s any lost data lying around." The Wabbit fished around in his fur for a crosshead screwdriver that he had bought cheaply in a market near the Big White Hospital and poked the side of the computer. In the Wabbit's head there lurked an entertaining idea that he would find a compartment clearly marked Lost Data, just inside the casing. He would then quickly unbolt it and make off. "If only life could be like that," thought the Wabbit and he patiently set to work.
at June 07, 2012