4. The Wabbit gets Rumbled 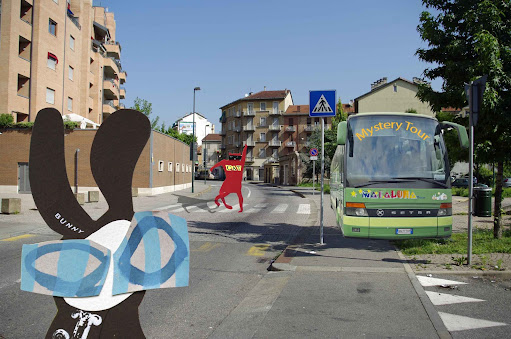 The Wabbit didn’t know what to do about being home when he ought to be on vacation.  He supposed that he would creep around until the bus went back to Rome and no-one would be any the wiser. But his worst fears were realised when he heard a familiar voice behind him. "Hey you!" It was the voice of Skratch the Cat Burglar. "Stop! We want a word with you!" he yelled.  The Wabbit cringed mightily and paused to think about all the explaining he would have to do and how embarrassing it was going to be. And then he did the first thing that came in to his head. He gave a weak smile and a little wave and started to hop quickly away. The Wabbit also knew it wasn’t going to end there because, as he hopped faster, Skratch started to chase him. "Imposter! Stop imposter!" cried Skatch. The Wabbit thought if he could make it to the river, he could hide until the crisis was over. Then he would double back round the block, rejoin the bus and return to Rome. But Skratch was relentless and he continued to shout. "Interloper! Fiend! You can’t go around pretending to be the Wabbit!" "I am the Wabbit," shouted the Wabbit feebly, but Skratch ignored him. "We’ll make you spill the beans, you fraud. You may as well give up! Surrender now and take your just deserts."  As the Wabbit started to lope, he knew he should really stop and explain. But something inside wouldn’t let him. It was the same something inside that wondered whether he enjoyed getting into these scrapes. "I’ll never go on a Mystery Tour again," thought the Wabbit.
at June 22, 2012