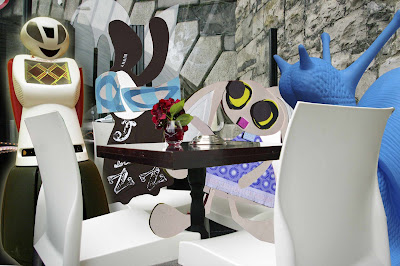 The gang gathered at the Railway Arch Café and Snail was, as usual, the last to arrive. The Wabbit knew this had nothing to do with being slow. It was all about making an entrance. "How’s your belly off for slime?" he said to Snail, just to bring him down to earth. "Excellent," said Snail. "I see you’re whatever size is normal for you today." So the Wabbit gave up trying to get the better of Snail and asked everyone what sort of adventure they thought they'd had. "It was rather Low Budget," said Lapinette with a smile, because she thought that might annoy the Wabbit - and then she dug him in the ribs so that he knew to be annoyed. "That’s not of itself a genre," said the Wabbit. "It's more of an approach." Robot chimed in with an electronic yet resonant voice. "It was a low budget, science fiction remake with contemporary references," he said.  "Oh all that football stuff," said Snail.  "That football stuff as you call it, was perfect," said Robot. "And it was a reminder of the days when football was more than over-strategised set pieces executed by automatons." There was a long silence because everyone knew Robot was right. Lapinette changed the subject. "Wabbit you didn’t fulfil your part of the deal with the Swarm," she said. "Oh but I did," said the Wabbit. "The Swarm now has all the football data from 1871." "Just statistics?" asked Lapinette. "And damned lies," quoted the Wabbit gleefully.
at June 15, 2012