6. The Wabbit sings in his Cell 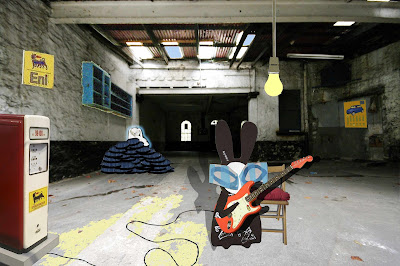 Locked in the Old Abandoned Garage, the Wabbit hopped around to see what he could see. But the Wabbit had an acute sense of paranoia which sometimes gave him an edge. And the more the Wabbit hopped, the more paranoid he became. "I'm having an Extreme Vacation," he thought, "and that’s very fishy indeed." He started to reckon the odds and the odds looked wild. This brought the Wabbit a sense of calm. "It's all a set-up," mused the Wabbit with a smile and he picked up a  guitar that had been left in a corner. "They showed me the instruments so I’d better play," he decided. The Wabbit strummed, picked out a few notes and began to sing the blues. "I took me a mystery tour, it was the road to hell. Took me a mystery tour, it was the road to hell." The Wabbit stopped, thought for a moment, then continued. "Now I’m a sad and lonely Wabbit," he sang, "stuck in an old prison cell." The Wabbit strummed and tried to figure things out. He wondered if anyone was listening, but he’d played for sympathy and nothing had happened. So he shuffled up the rhythm and ground out something heavier. "Wabbit please don’t go! Oh Wabbit please don’t go!" he yelled. "Down to Torino. Oh Wabbit please don’t go!" His voice echoed in the empty garage and melted into a silence that seemed to last forever. Then the Wabbit heard whispering. "Pssst. Pssst Wabbit!" He looked round and spotted  Ghost Bunny hiding behind a pile of old discs. “Eek, a ghost!” shouted the Wabbit. “Oh stop it Wabbit, I’ve come to get you out of here," breathed Ghost Bunny.
at June 26, 2012