The Wabbit & the After Adventure Cafe 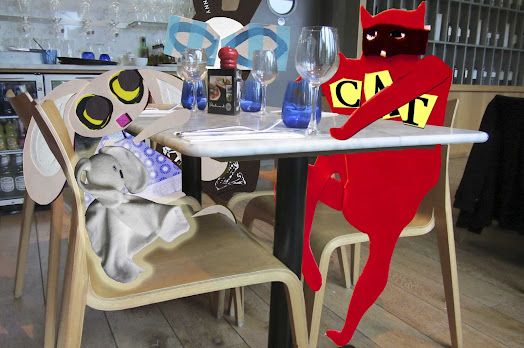 It was an exhilarating adventure and even though they had enjoyed it, they were glad to be back. Skratch the Cat Burglar crossed his legs and settled in his chair. "I'm almost afraid to ask what kind of adventure you had." "Surely not, Skratch!"said the Wabbit smiling. "You had us all a little worried," said Skratch, "especially when you didn't show up for the Carrot Club meeting." "Oh yes," said the Wabbit, "that'll take some explaining." They all chuckled because they knew the Wabbit seldom missed a meeting of the Carrot Club and when he did there was a lengthy inquest. "Well I think the adventure was mostly scientific," said Ghost Bunny, "with more than a touch of mysticism." "Science and magic don't mix," said Lapinette with a frown. "Quite right," said Skratch. "Genre is not to be treated in a flippant way for the purpose of idle entertainment." "Not so," said Ghost Bunny. "There are more things in heaven and earth, Skratch, than are dreamed of in your literary criticism classes." "Like ghosts," said the Wabbit. "Like ghosts," said Ghost Bunny and she paused for a minute. "In terms of quantum mechanics, the past isn't dead, it's not even past." she breathed. "That's William Faulkner," said Lapinette, "Pretty rich for a modernist," said Skratch. Lapinette looked at the Wabbit. "Wabbit you should never have sent Skratch to that night class." "I didn't," said the Wabbit. "I took him," said Ghost Bunny.
at June 01, 2012