3. The Wabbit on the Mystery Bus 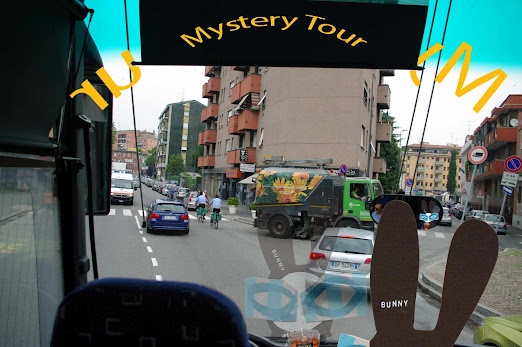 The Wabbit had only just settled back and started his puzzle magazine, when the coach took off at breakneck speed. Soon it was hurtling along the motorway, past cars and lorries and other coaches. It was so quick that the coach shook from side to side and the Wabbit found it hard to grip the carrot aperitivo that had mysteriously appeared on a small table beside him. Faster and faster went the coach. Trees and bridges and pylons and telegraph poles flashed past the window as it sped through tiny hamlets, then villages, then towns and finally the outskirts of several big cities. "Phew," thought the Wabbit. "This is more than I bargained for." The Wabbit soothed his neves by insisting to himself that this was indeed a mystery tour and mystery was the whole point. But he had an uncanny feeling that he wasn’t going anywhere scenic. Then the coach zoomed through industrial areas full of factories and depots and the Wabbit looked with interest at some areas of urban dereliction. "Mmm," said the Wabbit, "perhaps we're on an archaeological excursion," and he felt in his fur for his archaeological tool kit, which contained small instruments and brushes. But the Wabbit had left it in his other coat and he had to be content with a crack hammer and chisel which somehow had fallen out the tool roll. But the coach rolled on and on and it didn’t stop until it reached the centre of the city. The Wabbit looked out with horror. "Oh no, I’m home in Turin!”  he groaned.
at June 21, 2012