1. The Wabbit thinks about a Vacation 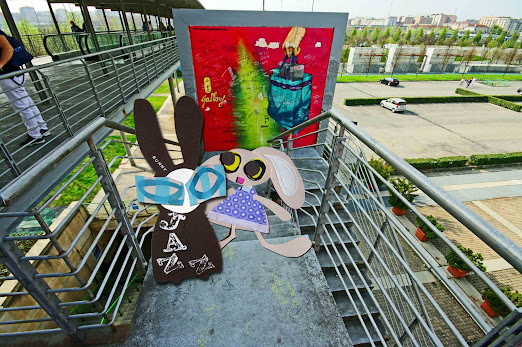 "What shall we do now?" asked the Wabbit. "Whatever you want, it’s your vacation," said Lapinette. "I don’t like vacations," grumbled the Wabbit. "It’s not true, you love vacations," replied Lapinette. The Wabbit stamped his rear leg for a while and ground his teeth. "Well, every time I go on a vacation, something happens and it turns into an adventure," he said. "That doesn’t sound too awful," said Lapinette smiling. "Then there's the packing," said the Wabbit, "and I always forget something really important." "Like what?" asked Lapinette. "Like my miniature set of hex socket keys," said the Wabbit. "Why would you need them on vacation?" asked Lapinette. "On a previous holiday," murmured the Wabbit, "I was locked in a filing cabinet. If I hadn’t forgotten my keys I would have got out more quickly." Lapinette knew better than to ask how the Wabbit had become locked in a filing cabinet. "I suppose that was an adventure!" she said. "It was rather a good one in the end," said the Wabbit feeling quite cheered. "There was lots to read and I found out some interesting stuff." Lapinette inclined her head enquiringly. "Like an old manual about things you can build in a shed," said the Wabbit. Lapinette sighed with relief. "So can we go to the gallery now?" she asked.  "I’ve quite forgotten what’s on," smiled the Wabbit. "but the building is much more interesting than anything in it." "Do you remember you hopped into an exhibit in the Modern Art Museum and smashed it," said Lapinette. The Wabbit grinned. "No-one knew the difference anyway," he chortled.
at June 19, 2012